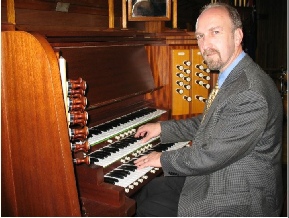 Jim Abraham studied at university in York, England and, as Organ Scholar, had the opportunity to perform in many English churches and cathedrals including York Minster, Durham Cathedral, Westminster Abbey and St Paul's Cathedral. He was also Deputy Organist at Selby Abbey with the late Mervyn Byers. After moving to Guernsey in the Channel Islands, he became very involved in the musical scene, accompanying the Guernsey Girls' Choir and the Guernsey Choral Society. Jim has performed in France, Belgium, Austria, Norway and America, recorded numerous CDs and performed on television and radio. In 2001, Jim moved to Australia and was appointed Head of Music at Loreto Normanhurst. He also taught at Our Lady of Mercy College, Parramatta, before taking the position of Coordinator of the Arts at Pittwater House School, Collaroy. Jim is still active playing in concerts and accompanying musicians around Sydney and is also an AMEB examiner. He conducts and accompanies The Cathedral Singers.