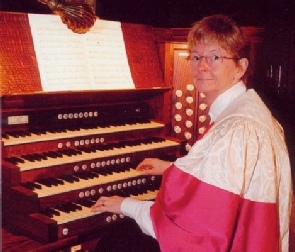 One of Australia's best-known organists, choir trainers and composers, June Nixon initially obtained Diploma in Music (Piano) and Bachelor of Music (Organ Performance) from Melbourne University, Australia. Postgraduate scholarships enabled further study in London, where she gained Associateship of the Royal College of Music, Fellowship of the Royal College of Organists, and was the ﬁrst woman to be granted the John Brooke prize for the Choir Training Diploma. In 1968 she was winner of the Australian National Organ Competition, and in 1973 was appointed Organist and Director of Music at St. Paul's Cathedral Melbourne. She retired from this position in February 2013 and is now Organist Emerita. Her inﬂuence outside the Anglican Church was recognized in 1995 by the Catholic Archdiocese of Melbourne awarding her the Percy Jones Award for "outstanding dedication and service given to music for worship." She was made a Member (AM) in the General Division of the Queenʼs Birthday Honours in 1998 for services to church music. In 1999, the Archbishop of Canterbury conferred on her the Lambeth Degree, Doctor of Music (Cantuar), and in 2013 she was awarded Associate of the Royal School of Church Music (ARSCM). June is a widely published composer, both in the USA and England, writing music which is accessible and enjoyable for both musicians and listeners. Several cathedral choirs have recorded her works, and her arrangement of the traditional carol “The Holly and the Ivy” was included in the Nine Lessons and Carols from Kingʼs College Cambridge in 2010 and 2017.